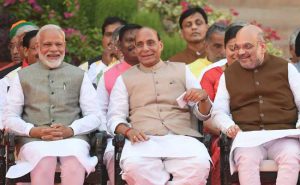 The ongoing coronavirus crisis is the most challenging situation that the Narendra Modi government has faced in the past six years, said Defence Minister Rajnath Singh on Saturday.

“Definitely this (Covid-19 pandemic) is the most challenging situation that we have faced in the past six years,” Rajnath Singh, said in an exclusive interview to Aaj Tak.

Rajnath Singh said, “However, India is fortunate that today we have a leader who is capable of overcoming this challenge. Had it not been for PM Modi’s well-thought and timely decisions, our situation would have been much worse. Look at the coronavirus situation in the US.”

Speaking about the achievements of the Defence Ministry in the past one year, as the Modi government 2.0, completes one year in office, Rajnath Singh said the creation of the post of the Chief of Defence Staff (CDS) is among the major achievements of his ministry.

“Attempts to improve coordination among the three services were being made for the past 10-15 years. But our government created the post of CDS at the earliest.”