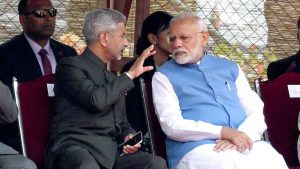 The Modi government is planning its diplomatic outreach with national objectives to be met in next 10 weeks, 10 months and 10 years. Rather than concentrate on big economic and military powers, India today is engaging smallest the countries in Caribbean, Africa and South-East Asia remembering that everyone has a vote in UN.

After returning to India, the EAM was in Gujarat leading a delegation of diplomats, ambassadors, and high commissioners to attend the Navratri celebrations and then hit the road again to visit Australia and New Zealand from October 3 to October 12. Atal Bihari Vajpayee’s foreign minister Jaswant Singh was the last top Indian diplomat who went to New Zealand, which also happens to be a key member of the Nuclear Suppliers Group (NSG). On Saturday, the Indian EAM is on way for a two-day bilateral visit to Egypt, after which he goes to Phnom Penh to attend the East Asia Summit and then to the G-20 summit in Bali with Prime Minister Narendra Modi.

The frenetic diplomatic activity by the Modi government with Minister Jaishankar holding more than five meetings with US Secretary of State Blinken, Foreign Minister of France and multiple meetings with the foreign minister of UAE and other gulf states are not exercises in vanity but part of a plan to increase India’s global diplomatic footprint. On Raisina Hill, it is called the 10X3 plan, where the diplomatic engagements are made keeping in mind the global lookout for the next 10 weeks, 10 months and 10 years.

While governments in the past have kept the focus on the permanent five members of the UN Security Council (UNSC) apart from big economic powers like EU, Japan and once called Tiger economies of Southeast Asia, the Modi government has decided to go beyond with special focus on Caribbean, Latin America, Africa, and far-Pacific countries. EAM Jaishankar’s visit to Brazil, Paraguay, Argentina between August 20-28 was an eye-opener for India’s top diplomat as he discovered that these Latin American countries were all in praises for Prime Minister Narendra Modi’s style of leadership. governance and his efforts to supply Covid vaccine to the needy countries without any quid pro quo or hidden liability. The Latin American countries as well as countries in Far-Pacific made the EAM quietly know that they too have a vote in the UN like the P5 and other countries that India had assiduously courted in the past.

The biggest stamp of Modi government’s diplomatic outreach has been on the Middle East Asia with United Arab Emirates counted as a very close ally followed by Saudi Arabia, Iran, Kuwait, Oman, and Qatar. India today has very close information sharing with UAE, who also went out of the way to help the Modi government tide over crisis during the raging global pandemic. Key Middle East countries work with India on counter-radicalization and share classified information on pan-Islamic terror groups. Simply put some of the top global leaders including those from Middle-East are on SMS and What’s App chats with EAM Jaishankar and National Security Advisor Ajit Doval with all diplomatic formalities and protocol set aside. For example, the anti-drone protection system for PM Modi’s car cavalcade was offered by UAE, just as the UAE Air Force provided mid-air refueling to Rafale fighters flying from France and en-route to Jamnagar in Gujarat.

Key countries like US, France, Russia and even China are just a phone call away from the Modi government with India also going out of the way to engage the global south by providing much needed assistance without any hidden deals. The Modi government’s efforts to keep bankrupt Sri Lanka, despite its close ties with China, afloat apart from paying special attention to allies like Bhutan, Bangladesh and Nepal during global pandemic is now etched in stone.

While the world abandoned Afghanistan after occupation of Kabul by the ultra-conservative Sunni Pashtun Taliban, the Modi government decided to engage the extremists to supply Covid vaccines, food, and medicines to the poor people of the strife torn country. With India steadily on way to become the third big global economy by 2030 with a fast-developing military-industrial complex, the diplomatic outreach and its clout have already started yielding positive results.