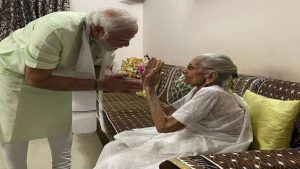 New Delhi: The BJP on Friday sharpened its attack on the Aam Aadmi Party after its Gujarat chief Gopal Italia was heard purportedly mocking the prime minister’s mother in a video, and said people of the state will make it pay for “abusing” her.
An old video of Mr Italia emerged on Thursday in which he is purportedly heard mocking PM Modi’s 100-year-old mother Hiraba Modi. Mr Italia is also heard purportedly using a derogatory word for PM Modi, drawing strong condemnations from BJP leaders.

“If you think abusing the prime minister’s mother will help you gain political popularity in Gujarat, you are mistaken. And for that mistake, Gujarat and Gujaratis will make you pay the political price in the forthcoming elections,” Union minister Smriti Irani told reporters on Friday, attacking AAP leader Arvind Kejriwal.

She claimed Mr Italia’s comments were made on Arvind Kejriwal’s instructions, saying the Gujarat AAP leader has made a number of comments which have also “insulted” the Hindu society and temple-going women.

Ms Irani said it is “absolutely unforgivable” if AAP leaders seek to abuse a 100-year-old woman who has nothing to do with politics.

“Her only crime is not that she is in politics but she gave birth to Narendra Modi who is thwarting your (Kejriwal’s) political designs,” the BJP leader said.

With Mr Italia claiming that the BJP is targeting him as he is from the Patidar community, Irani said he was hiding behind new excuses and this showed that the AAP would play community and gender cards for its political ends.

“That Arvind Kejriwal can fall to new lows is not surprising. What they don’t realise is the esteem with which Gujarat and Gujratis hold women especially mothers in our society,” she said, claiming that the regional party will suffer political decimation in the upcoming state assembly polls there.

The AAP leadership in the state has been making all sorts of statements, including “slurring Hindu women and religious institutions”, to draw political attention, Ms Irani alleged.

In another video, Mr Italia was purportedly heard urging women not to go to temples, alleging that religious places were dens of exploitation of women.

With the “blessings” of Mr Kejriwal, he “maliciously and in abusive form” attacked PM Modi’s mother, Ms Irani said.

Mr Italia was on Thursday detained in New Delhi for more than 2.5 hours by the Delhi Police after he appeared before the National Commission for Women (NCW) in connection with his alleged comments against PM Modi amid protests by AAP members outside the women panel’s office.

Mr Italia claimed that he was “threatened and treated indecently” by NCW chairperson Rekha Sharma after he appeared before her “as he is a Patidar and his community members have come out in support of the Kejriwal-led party” ahead of the elections.

Mr Kejriwal said his detention had triggered massive anger in the Patel community across Gujarat.