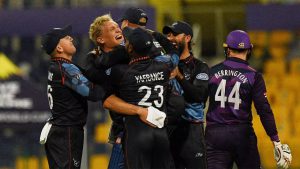 The Sri Lankan cricket team got off to a shocker in their opening T20 World Cup 2022 match against Namibia, losing the contest by a whopping 55 runs. The Lankans were taken by surprise by Namibia in the match who were better in all departments of the game. While the result did leave many fans surprised, Sri Lanka didn’t look like themselves and failed to live up to the ‘Asian Champions’ tag. An incident from the match sums up the same.

A total of 8 teams are participating in the first round of the match which would see as many as four qualify for the Super 12s stage. Sri Lanka, despite being one of the favourites to go through and the reigning Asia Cup champions, were hammered by minnows Namibia in the opener on Sunday.

During their fielding, Sri Lanka conceded a dreadful overthrow that encapsulates their lack of focus in the match. There wasn’t even a single run available but the Namibian batters managed to add 1 run to their total as a complete bonus. Here’s the video of the incident:

It was the 9th over of the match when the incident took place. Wicket-keeper Kusal Mendis unnecessarily threw the ball, leaving two fielders baffled, and allowing the Namibian batters to take a single.

Namibia looked eager to post a big total on the board throughout the innings. Jan Frylinck was the top-scoring batter for Namibia, scoring 44 runs off 28 balls. Even Loftie-Eaton, Stephan Baard and Gerhard Erasmus also produced handy knocks to take the team’s score to 163/7.

In reply, Sri Lanka could only score 108 runs, hence incurring a loss by 55 runs.

Speaking of the win, Namibia’s skipper Erasmus said: “Incredible journey, last year was a special experience for us. We’ve started a great win, but a lot of work to do throughout this tournament still. It’s been a historic day for us. The opening day has been quite special but we want to kick on from here and qualify for the Super 12 stage. We understand the bigger picture as well. Credit goes to Pierre (de Bruyn) the way he has installed coaching to this team, one that’s a winning culture and one that sticks together. With the limited resources, I don’t think there’s anyone else that could run such a tight ship.”