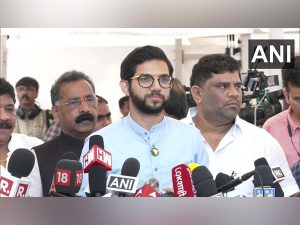 MLA Pratap Sarnaik has written to the Chief Minister that as a tribute to Shiv Sena Ramesh Latke, the sitting MLA from the constituency who died earlier this year, all parties should back Rutuja Latke and let her win the election.
Mumbai: A by-election in Maharashtra has drawn cross-party appeals in support of the candidate, Rutuja Latke, who is contesting after her husband, Shiv Sena MLA Ramesh Latke, died earlier this year.
Rutuja Latke, a candidate of Uddhav Thackeray’s Sena faction, is fighting from her husband’s Andheri (East) constituency against the BJP’s Murji Patel. One of the first leaders to come out in her support was Raj Thackeray, Uddhav Thackeray’s estranged cousin.

The Maharashtra Navnirman Sena chief, in an unexpected gesture, wrote to BJP leader and Deputy Chief Minister Devendra Fadnavis urging him to withdraw his party’s candidate so Rutuja Latke could win the bypolls unopposed.

Hours later, an MLA from the rival Eknath Shinde camp also wrote to the Chief Minister that the BJP should not field a candidate against Ms Latke as a tribute to her late husband. In his letter to Mr Shinde last evening, MLA Pratap Sarnaik said all parties should back Ms Latke and let her win the election.

Today is the last day to file nominations for the Andheri East bypoll on November 3.

Earlier Sunday, Raj Thackeray wrote to Devendra Fadnavis: “Late Ramesh Latke’s wife Rutuja Latke is contesting the election after her husband’s death. I have been a witness to Ramesh Latke’s journey from a worker to MLA. His wife becoming an MLA after his death would be a tribute to the departed soul.”

In the letter addressed to “Dear friend Devendra”, Raj Thackeray also said: “I think by doing this we are paying tribute to the late representative of the people. To do so is also in line with the great culture of our Maharashtra. I hope you will accept my request.”

Responding to his letter, Mr Fadnavis said he could not take the decision alone and that the matter needs to be discussed with the senior party leaders and Chief Minister Shinde.

NCP Chief Sharad Pawar also appealed to the BJP to withdraw its candidate.

“The term for the new member (MLA) will be just one-and-half years. The bypoll is being held because of the unfortunate death of Ramesh Latke. His contribution must be taken into consideration,” Mr. Pawar said.

The Uddhav Thackeray faction has accused the Eknath Shinde faction of trying to sabotage their candidate ahead of the elections by influencing the Mumbai civic body to not act on her resignation.

Ms Latke, who worked in the Brihanmumbai Corporation as a clerk, could file her nomination for the bypolls only after a court ordered the civic body to accept her resignation.

BJP candidate Murji Patel, who filed his nomination last week, has said he is ready to withdraw from the race if the party asks him.