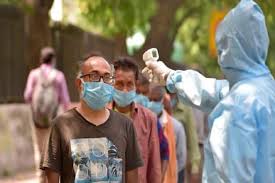 The 65-year-old patient, a native of Thiruvalla in Pathanamthitta district, was undergoing treatment at the Kottayam medical college hospital, where he died of the virus early on Friday.

Of the infected, 33 people had come from various countries while 23 had come from other states, including Tamil Nadu and Maharashtra 10 each, Karnataka, Delhi and Punjab one each and one person was infected through contacts, Chief Minister Pinarayi Vijayan told reporters here.

Palakkad reported 14, Kannur seven, Thrissur and Pathnamthitta six each, while Malappuram and Thiruvanthapuram five each, Kasaragod and Ernakulam four each.

Ten people have been treated and discharged from hospitals.

The total of active cases has touched 577 and 1.24 lakh people are under observation.

The government said as many as 12,191 isolation beds were ready in state-run hospitals.

Two inmates of special sub-jails in Thiruvananthapuram and Neyyattinkara have tested positive while other prisoners of their block and the police officers are kept under observation.