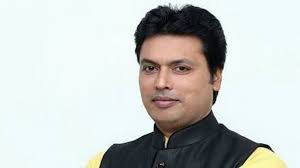 “This is a dream-come-true project for us. The new waterway project would be operational in three months and ships carrying goods from Bangladesh would start moving,” he told reporters.

The lower segment on the Gomati river between Sonamura and Daudkandi in Comilla district of Bangladesh has been nominated as a new protocol route and an agreement in this connection was signed between India and Bangladesh on May 20.

“With the starting of the new waterway, Tripura would emerge as a gateway to the north-eastern region. I thank the prime ministers of India and Bangladesh for approving the new waterway. There is no doubt that it would boost the state’s economy and communication,” Mr Deb said.
The new protocol route between the two countries will facilitate carriage of goods from the Ashuganj port on the Meghna river in Brahmanbaria district of Bangladesh to Sonamura in Sipahijala district of Tripura.

Movement of vessels on the Gomati river for providing waterway connectivity to Tripura would be possible only after the inclusion of the 60-km stretch between Sonamura and Daudkandi as part of the Indo-Bangladesh Protocol route, Mr Deb said.