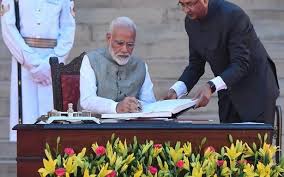 Upon completion of one year in office, Prime Minister Narendra Modi on Saturday wrote an open letter to the nation. In the letter, he mentioned the several achievements of his government.

The PM also wrote at length about the challenges India continues to face amid the novel coronavirus outbreak and the global economic downturn this pandemic has prompted.

“From 2014 to 2019, India’s stature rose significantly. The dignity of the poor was enhanced. The nation achieved financial inclusion, free gas and electricity connections, total sanitation coverage, and made progress towards ensuring housing for all,” PM Narendra Modi wrote in his letter.

In addition, the Prime Minister also pointed at various posts initiated by his government such as the appointment of General Bipin Rawat as India’s first Chief of Defence Staff, the preparation for Mission Gaganyaan, and a campaign to vaccinate 50 crore livestock free of cost among others.

Elaborating on the schemes of his government that have brought changes across India, PM Modi mentioned the disbursement of Rs 72,000 crore to as many as 9.5 lakh farmers under the PM Kisan Samman Nidhi. He also mentions the Jal Jeevan Mission that aims to ensure supply of potable drinking water through piped connections to over 15 crore rural households.

“For the first time in our country’s history, farmers, farm labourers, small shopkeepers and workers in unorganised sector are assured the provision of regular monthly pension of Rs 3,000 after the age of 60 years,” the Prime Minister wrote in his letter to the nation.

A separate department was created to enable fishermen to avail bank loans, a Vypari Kalyan Board is also being constituted for timely resolution of the problems faced by traders, Prime Minister Narendra Modi wrote.