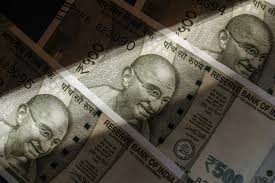 A knock-on effect of the emergency restrictions on India’s financial markets has been the drying up of volumes and a spike in volatility.
With India in the throes of an unprecedented lockdown, Prime Minister Narendra Modi’s record borrowing program may face a rough start.
The government on Tuesday said it will sell Rs 4.88 lakh crore ($64.5 billion) of bonds in the six months to September. While the number is less than what the market expected, the auctions may get fewer bids as the crackdown to stop the spread of the coronavirus forces traders and bankers to stay indoors.

“Not all investor categories may be geared to participate, so bidding may be less than what it would be have been in normal circumstances,” said Ashish Parthasarthy, treasurer at HDFC Bank Ltd., India’s most valuable lender. “In the present environment it is unlikely that participants will take an aggressive approach toward fresh investments.”

A knock-on effect of the emergency restrictions on India’s financial markets has been the drying up of volumes and a spike in volatility. For instance, no bonds were bought or sold in the first half hour of the session on March 24, and it took more than 10 minutes for the first deal to cross the trading platform on Monday. The turnover averaged Rs 35,300 crore last week, versus the daily average Rs 43,300 crore so far this year.

Remote working hardships are becoming common as global banks have sent much of their staff home to stem the spread of the pandemic. But adjusting to the new regime hasn’t been easy for traders because they rely on high-speed connections and multiple screens available only in offices. Compliance requirements of recording every trade and ensuring there’s no security breach is adding to difficulties.

“I feel like kicking myself when I can’t trade but just watch,” said Paresh Nayar, head of forex and fixed income at First Rand Bank in Mumbai. “Life has come to a standstill.” Mr Nayar, who has set up a terminal on the dining table, said bank rules prohibit traders from taking proprietary positions when working remotely.Still, the government expects “substantial demand,” Economic Affairs Secretary Atanu Chakraborty told reporters in New Delhi. The plan seeks to raise 62.5 per cent of the record Rs 7.8 lakh crore.

The auctions, which start April 10, come as investors globally expect a surge in supply this year to fund stimulus plans. Germany, France, Spain and Italy are due to auction debt totaling 25 billion euros ($28 billion) during March 30-April 3, according to an estimate by strategists at Commerzbank AG. The UK will offer a combined 5 billion pounds of 2028 and 2041 gilts next week.