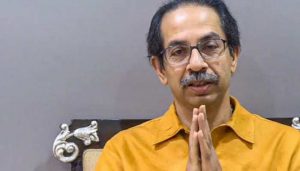 Several Shiv Sena MPs who attended a meeting convened by Uddhav Thackeray on Monday at his residence in Mumbai “requested” him to support NDA candidate Droupadi Murmu for President and open the door to a possible reconciliation with the BJP and the breakaway Eknath Shinde faction.
ccording to party sources, a decision on the President’s election to be held on July 18 will be taken “in a day or two” and Thackeray seemed “positive” on the request to support Murmu

Sources said 13 of the party’s 18 Lok Sabha MPs from Maharashtra and two of its three Rajya Sabha MPs attended the meeting at Matoshree. At least eight of them supported Murmu’s candidature and a possible “patch-up” with the BJP and the Shinde faction, “considering the upcoming elections (for local bodies) and the party’s future”, sources said.

“Many of us requested a patch-up with BJP and Shinde as we had a natural alliance with the BJP and it’s our ideological ally. He (Thackeray) did not comment on it but said it will be considered,” a senior party functionary said.
“There was bitterness between Sena and BJP, and the rebellion increased it. But if the party extends support to Murmu, the door for reconciliation will be opened and there will be an opportunity to begin the process of patching up and establishing a relationship once again,” the functionary said.
Sources said the five MPs who were not present were Shinde’s son Shrikant Shinde, Bhavana Gawali, who is under the ED scanner, Sanjay Jadhav, Sanjay Mandlik and Hemant Patil. The Sena’s lone MP from Dadra and Nagar Haveli, Kalaben Delkar, was also not present.
According to Sena functionaries, Jadhav, Mandlik and Patil conveyed to the Thackeray camp later that they could not attend the meeting due to “some issues”, including “heavy rain in their respective constituencies and personal reasons”. Sources said Patil met Thackeray after the meeting.
Last week, the Thackeray camp had removed Gawali as chief whip of the Shiv Sena Parliamentary Party and nominated MP Rajan Vichare in her place. Two weeks ago, Gawali had written a letter to Thackeray suggesting an alliance with the BJP.
The Sena’s Rajya Sabha MPs Sanjay Raut and Priyanka Chaturvedi were also present. The third Rajya Sabha MP, Anil Desai, “could not attend as he was in Delhi”, said sources.
The Shinde camp has claimed that at least 12 Sena MPs are in touch with the Chief Minister — and that many of them met Amit Shah in Delhi on Friday when Shinde and Deputy Chief Minister Devendra Fadnavis had gone to meet the Union Home Minister.
Rajya Sabha MP Sanjay Raut said: “Keeping politics aside, Shiv Sena has earlier, too, extended support to Pratibha Patil and Pranab Mukherjee… the current NDA candidate is a tribal woman and whether to support her was discussed at the meeting. There was also a discussion about UPA candidate Yashwant Sinha… Soon, our party president (Thackeray) will take a decision on whom to support.”