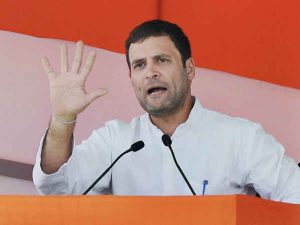 The statement was in response to senior advocate and Congress leader Kapil Sibal asking the the SC to defer hearing in the Babri Masjid–Ram Janmabhoomi case.

Rahul Gandhi is a devotee of Babar and relative of Khilji, says Bharatiya Janata Party
inc.in
The Bharatiya Janata Party on Wednesday stepped up its attack on Congress over the party’s response to the Supreme Court’s adjournment of the final hearing in the Babri Masjid–Ram Janmabhoomi case to February 8.

“Gandhi has teamed up with Owaisis and Jilanis to oppose [the] Ram temple in Ayodhya,” Rao wrote. “Rahul Gandhi is certainly a “Babar Bhakt” and a “Kin of Khilji”. Babar destroyed Ram temple and Khilji plundered Somnath.”

Rao added: “Nehru dynasty sided with both Islamic invaders. Travesty and perversity of dynasty!”
GVL Narasimha Rao
✔
@GVLNRAO
Rahul Gandhi has teamed up with Owaisis, Jilanis to oppose Ram temple in Ayodhya. Rahul Gandhi is certainly a “Babar Bhakt” & a “Kin of Khilji”. Babar destroyed Ram temple & Khilji plundered Somnath. Nehru dynasty sided with both Islamic invaders.Travesty & Perversity of dynasty!
8:37 AM – Dec 6, 2017 · New Delhi, India
931 931 Replies 1,312 1,312 Retweets 2,196 2,196 likes
Twitter Ads info and privacy
The statement was in response to senior advocate Kapil Sibal, who had appeared for the Sunni Waqf board, asking the court to push the hearing to July 2019 after the General Elections. Sibal, a senior Congress leader, had said there are “serious repercussions” outside court every time the matter is heard.

Bharatiya Janata Party President Amit Shah had also attacked Congress Vice President on the matter on Tuesday, and said that the Congress has “double standards”. While on the one hand, Gandhi is on “election tour of temples” in Gujarat, on the other hand, his party wants the hearing to be deferred, he had said.