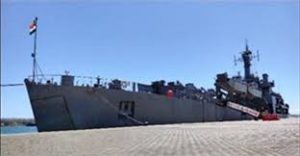 Visakhapatnam: The foundation stone for a missile park was laid at INS Kalinga by Cmde Rajesh Debnath, Commanding Officer, in the presence of Flag Officer Commanding-In-Chief, Eastern Naval Command Vice Admiral Atul Kumar Jain.
The park ”Agneeprastha” once completed will be dedicated to all the officers, sailors and support staff of INS Kalinga, who have served in this premier op-support Base of the ENC since its establishment in 1981.

The park also commemorates the award of the prestigious Unit Citation to INS Kalinga for 2018-19 and aims to capture glimpses of missile history of Kalinga since 1981 till date, a navy release said.

The park has been set up with a replica of missiles and ground support equipment (GSE) that showcase the evolution of missiles handled by the unit.