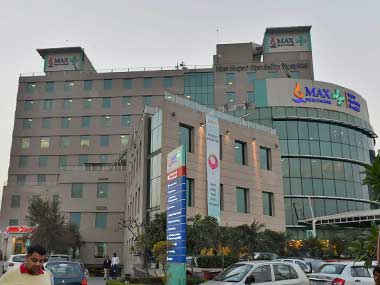 No one can imagine the pain, suffering and mental agony of the parents who lost their premature twins. One of the twins was initially incorrectly declared dead by the Max Hospital in Delhi’s Shalimar Bagh, but the baby died some days later.

But whether Max Hospital’s action warrants closing down the facility is open to debate. With the baby sadly gone, the Delhi government is literally throwing the bathwater and the tub in a grandstand that directly affects other patients and strands trained doctors and nurses who were not even involved in this unacceptable mix up.
What is gained by cancelling the licence for this establishment and removing medical talent from service? We are a nation where there is one doctor (and not always a good one) for every 2,000 people, according to the Medical Council of India.

If these trained staffers are going to be inducted into other Max branches and facilities, then the whole exercise is a failure. All the Delhi government is achieving is shutting down a building.

Max Hospital in Shalimar Bagh. PTI
The government has actually jeopardized more lives through its action. If one of those patients has to pay the price for the arbitrary cancellation of the license, then how is the Delhi administration any less guilty than the doctors it is pillorying?

This populist response has not been sufficiently thought out. Certainly, the administration should be penalized, not just for the error but also for the callous and ghoulish dispensation of the bodies in a polythene bag. This aspect of the matter should be addressed.

As for medical error, it will occur. These are human beings, and doctors will make mistakes. If we start locking up institutions every time a medical practitioner errs, there will be no hospital or clinic functioning. By now, Gorakhpur’s BRD Hospital should have been a derelict building, what with infants dying in multiples nearly every day.

Medicine is an inexact science and genuine error has to be separated from deliberate malpractice. The important differentiating element is attitude.
The government should fine them heavily. The family should be compensated as much as possible through the hospital that wronged them. Further, an inquiry should be instituted against the staff that so crudely dismissed the deaths.

Also, the Delhi government should bear in mind that false death pronouncements happen more often than one imagines. It is not in the realm of the impossible. Recall the Polish 91-year old Janina Kolkiewicz who woke up in the morgue 11 hours after she was declared dead by the hospital. Kenyan Paul Mutoro, aged 24, woke up 15 hours after he was sent to the morgue. There are such cases all over the world where doctors are misled by a weak pulse, a very slow heart rate, a condition called catalepsy where muscles stiffen like they were into rigor mortis, and the heartbeat is not discernible. The cold temperature in the ICU can also contribute to a false assessment.