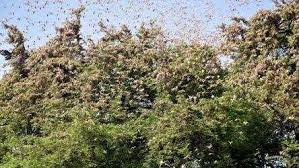 Bihar has issued a general alert to districts in view of the locust invasion in many states of the country.

Bihar Information and Public Relation Secretary Anupam Kumar on Friday said the districts have been informed to stay prepared in accordance with the standard operating procedure of State Agriculture Department.

Earlier, the state agriculture department has issued an advisory on the locual invasion in the state. There is a possibility for locust invasion in Bihar following largescale crop damages in Gujarat, Rajasthan, Madhya Pradesh, Uttar Pradesh and other parts of north India.

Many states have already borne the brunt of massive damages to crops and fruits due to desert locust invasion. Swarms of locusts have been spotted moving from the western region towards east. The insects have been recorded in the lower areas of Madhya Pradesh and Uttar Pradesh.

According to experts, if the locusts keep moving further east from where it is, there is a possibility that it can enter into Bihar through east Uttar Pradesh. The locusts are known to cause largescale damages to vegetables, trees, crops and fruits. Bihar agriculture department has asked districts to immediately prepare to protect crops.

Incidentally, an adult desert locust can consume roughly its own weight, about 2 gram food every day. A 1 sq km swarm of 40 million locusts could eat the same amount of food in one day as about 35,000 people. This is based on a person eating an average of 2.3 kg of food per day.

Earlier on Thursday, Bihar agriculture Minister Prem Kumar chaired a meeting on the threat of the locusts. The department’s concerns have been communicated to the districts bordering east Uttar Pradesh, including Gopalganj and Kaimur.